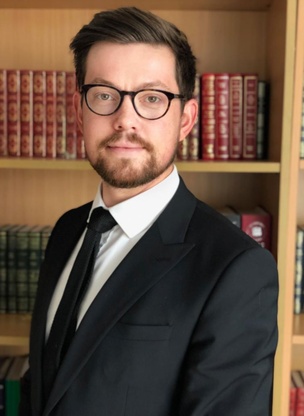 Adam joined Lewis Nedas as a Paralegal in October 2013 and successfully completed his Training Contract in December 2015. He now works in our new Commercial and Litigation Department with Ian Coupland.

Adam has a strong interest in football and is an active Committee Member and former Club Secretary of his local football club in Sussex. He also plays several musical instruments and has performed at live gigs in London and the South East of England.

"His dedication and commitment was a real and pleasant surprise. I'd like to add that for someone like myself who was experiencing the business of solicitors for the first time, your firm set an extremely high standard. It was a pleasure to work with Adam, and I feel this standard of competency and total dedication to the work is rare. I wouldn't hesitate to work with him again."

"Adam was extremely thorough with this process from start to finish, and I never felt as though he cut corners. He also took the time to explain in detail each stage of the process - both valuable and reassuring to someone who knows nothing about property law, and I trusted his judgment. My tenant was evicted quickly and smoothly (considering) so I'm definitely satisfied. He let me know from the very beginning that he was available 24/7 - a service I didn't think I would use but I most certainly did, weekends included. Not only did this feel as though he was going above and beyond his job (I'd have thought most solicitors work 9-5) but it meant that I felt supported at all times."

"Thank you Lewis Nedas, especially Adam Creasey. I am glad that I was referred to Lewis Nedas. We had a case of unfair dismissal which was dragged out by the employer[...b]ut in every step of the way we had the professionalism and support of Lewis Nedas, which helped us fight till end and win the case. Furthermore, we were compensated well enough. I really appreciate the team, who were there with us every step of the way, not just legally but emotionally. Thanks once again to Adam Creasey and the team at Lewis Nedas, who I would highly recommend.”

"Many thanks for your work in the last few weeks. I appreciate the speed and efficiency with which you have dealt with everything.”

“The advice and service that I received from Adam was exemplary. He was swift and knowledgeable, and he won what seemed like an impossible case for me. I wholeheartedly recommend Lewis Nedas Law and would certainly use them in the future.”

"Thank you so very much for your help. Your knowledge and intuition about the situation and your candid responses gave me confidence."

Celebrating our 35th anniversary in 2017, we are leaders in criminal defence, serious fraud, serious crime and many other areas of legal practice. We have been involved in many leading cases over the last 35+ years and are well known for our genuinely high acquittal rate and overall success rate. Please click the Legal 500 logo below for more information about our rankings.